I’m republishing the progress of my Rangeley boat wannabe from 13 years ago.  Read on and you will see why.  (2017)

approximately 94 years ago. The project began out of an obvious love of Maine, Fly Fishing, and the traditions of the two.

The boat was acquired from a generous group of individuals noticing my passion that have summer stays on Turtle Island – Echo Lake, Maine. The original owner of the boat, Sanford Ketcham, was a member of the group that built the camp on the island. Sanford was on the crew team at Harvard beginning his freshman year in 1931. That is when it is believed that he bought the boat. It is unknown if he purchased the boat new or if it was used at the time. “Ketcham” is 17’4″ in length, 44″; beam, and 12″ depth open gunwale boat. It has two rowing stations and a seat in the bow for a sport.

July 9, 2002- I Acquired the boat today- it is a dream come true. There is work to be done, but information needs to be found before I stat. I have never restored a wooden boat before, but my father-in-law has restored a Rangeley boat to pristine condition, and I now that he will be able to tell me what direction to go in.

July 18, 2002- Used the Internet to find out information about the boat and the makers. A website states that information, original sales receipts, and catalogs from the company are available at the Maine State Library and/or Museum. I have decided that n matter the information I find out about the boat the inside of it needs to be stripped so that the product, in the end, will look the best.

July 20, 2002- I have begun under the hot sun to strip the boat using a paste-like chemical stripper and a putty knife. This looks like it is going to be a long arduous job. I have set it up on the trailer and am using it as the easel to work from. I thought that I could get this job done in about three weeks-

August 2002- I spend an hour and a half to strip the distance of four ribs. I do at least a section a day with eight ribs stripped I feel that I have really accomplished something in this heat.

Late August 2002- I visited the Maine state library and Museum today to get information. I spoke with all of the right people and to no avail- there is no information there and the website that stated that they would have information is now no longer on the net. I am stuck as to what the next step of the process is. There are bad splits in the seat foundations and the decks. I can’t repair these on my own.

Early September 2002- I finished stripping the inside of the boat today!!!!!!!! Big accomplishment. I have covered it with a tarp for now.

October 2002- What to do with the boat for the Winter. It should be in cold storage, but I also want to be able to work on it during the Winter months. I found a basement of a business owner that my father-in-law and I can store and work on our boats in. Maybe I will ask Santa for some boat paint for

Christmas-The business owner only wants me to tie some flies for him in exchange!

January 2003-Santa didn’t get me the paint, but I can tie some great flies with my new Renzetti Master Vise! No work on the boat yet. I think that my next step is to rebuild the floorboards and the seat foundations. I had a tying lesson at Fly Fishing Only with Mike Holt, and he stated that he knew of a guy that knows a lot about the Kennebec Boat Company. I will contact him and see if he can help with what types of woods I need to be using to rebuild these pieces.

February 2003-Surprise- I am pregnant! Due to the assumed lead content of the paint, I am unable to work on the boat until after the baby is born in October. Unfortunately, the project is on hold for about a year.I hope to work on it next winter and have it in the water May of 2004.

2017- REALLY- Life gets in the way.  We bought a really old used trailer with license plates from 1992 that will hold the boat with some work.  Paid $60 for it.  The seats have been rebuilt and need to be installed.  I have the paint now too!  It’s coming together!

All I have asked for is a set of oar locks for my birthday.  It’s the final motivator.  I swear this is the summer and the baby that I was pregnant with that put the stops on this project 13 years ago says that he will help to paint this boat and get it in the water this year.  phew!!!!

July 14, 2017 – I got the oarlocks and went into the great outdoors wielding a shop vac and a paintbrush.  It felt good to get back to work on Ketcham.  Ironically, the boat sits beside a pile of siding that I really should have put on the house by now.  I am battling my will between the fun of the boat or the get-r-done push of the addition that I put on the house last year that I haven’t quite finished.  For today the boat won.

I got to Upper Dam this weekend to fish with friends and check out the new dam for the first time.  From the car, I got to talking and telling the famed story of Carrie’s first fly that she tied and caught the famed 6 pound 13-ounce brook trout not on a gray ghost as everyone thinks, and won second place in the Field and Steam contest.  The hill is a downward slope and not a bad walk in when with good company and distracted.  Thanks, Dwane and Tom!

Fishing was good for me with a salmon on a nymph rig early on since we were first into the pool that morning.  As I cross the lower part of the pool from the big rock back to the opposite side I came in from I watch each step looking for a piece of wood that resembles the old dam, planks, metal step, the metal contoured siding, anything that I can salvage and take back a piece of and attach some flies to.  I find a heavy piece of metal that looks like it might have belonged, while I can lift it out of the water I decide it’s too heavy to carry out to the car up the hill, and not a nice piece to attach flies to.  So I decide to drop it back where it lay to keep history where it belongs.  I find a long plank and decide to pull a piece off of it.  It matches the timeline and is in line with the heaviest flow from the dam.  It makes sense that it came from the demolition from the dam.  It’s a keeper and I can carry it.  I find another like it nearby.  Out of the pool, I come dragging wood, rod, and a smile.

A boat in this pool would have made fishing it a lot easier this time of year.  No boats with motors allowed.  Metal boats instead of Rangeley boats line the shore now.  I think of the Ketcham at home still in need of so much attention.  I’ve been looking into the oarlocks to see if I can get replacements.  The sets don’t match.  I want to see if Rangeley boats had the rounded raised ones or were they flat like my easier ones to find today like my rear set?  More to do.

We walked to Carrie’s house to see the plaque and talk about the lore. God, I love this place.

I dream of a century ago on the walk out and hope that the new dam ages well so that in another hundred years that generation has something to hang onto and tell storied legends about and want a piece of too.

Jeez, the walk back is a bit tough though.  We reach the gate with the port-a-potty and old parking lot that I must have not noticed on the way in since I was telling stories.  I remember the walk to this gate from previous years and the old Upper Dam.  I am annoyed now. We march on.  Every corner Eric tells me it must around the next bend and I am more annoyed and rest.  It is a long and strenuous hike out.  When I reach the car I am discouraged enough to think that it was probably my last trip to Upper Dam and I get a little choked up thinking I am losing the lore.  I feel for those that will never get to this place and not be part of the new century of anglers that get to be part of the tradition because of the hike.  The gate is here to discourage anglers.

We go to the OSHM museum next and the museum director and friend, Bill Pierce,  is there on duty.  After a warm welcome, we talk about the “lovely” hike back to the car and he sets me on the idea path of boating into Upper Dam with a motor then pulling the motor and rowing into fish the best pool in the state of Maine.  Thank you, Bill, for inspiring me, again, to be my best.  I’ll keep the lore by bringing the past to the pool.

Forward-thinking- I am home today with my son Gradon and will work on the boat.

I did an intensive restoration of the Ketcham as the final push to get ‘er done.  I logged it in pictures as seen below.  I replaced a few lapstrake boards, filled a lot of holes and rough spots, tried to sand it smoother than it was before, then used marine primer and marine paint to finish it.  I had to rebuild some of the parts like the blocks that the oarlocks sit on and the decks as well as the non-existent floorboards.

In the end, I filled it with water every day for a week to attempt to swell the wood so it wouldn’t leak too badly on the first voyage. 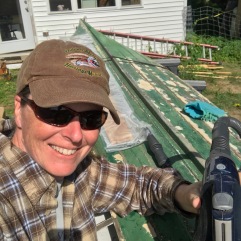 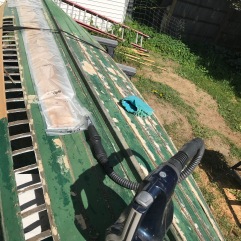 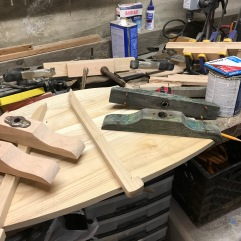 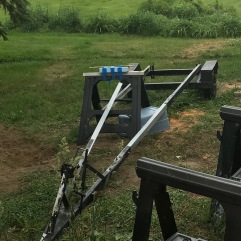 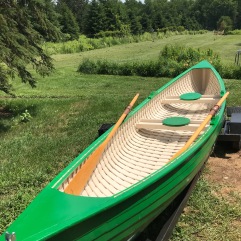 “Ketcham” For Sale $2000 with homemade trailer 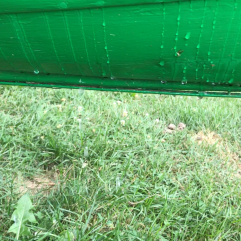 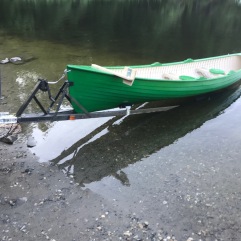 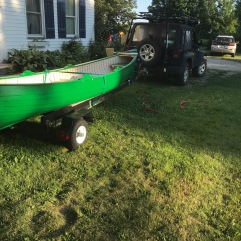 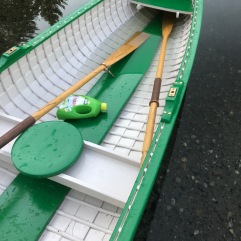 So it leaked.  In 2019 we need to find a way to actually soak it.  I have listed it for sale, but am reluctant to let it go unless it is to a good lake and owner.  I want it to be used.  I can’t since I am not on the water and it will just remain dry and I discouraged if it sits here.  I am asking $2000 with the homemade trailer included.

One thought on ““Ketcham””