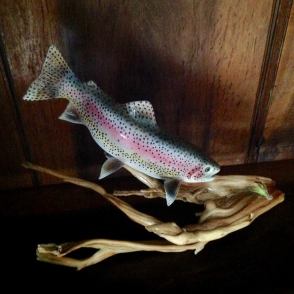 A wood Carver and trout enthusiast, Jim Wiley, is a kind hearted southern gentlemen that I came across on face book and began following as he would release pictures of his beautiful artful carvings.  Trout emerge from pieces of driftwood that he finds near his home in Tennessee or from chosen pieces of wood that he selects depending on the characteristics that he seeks for the piece.

I thought it would be neat to use his carvings to display my flies and vice versa.  In that way we could support each others endeavours and in different geographical regions. How it really happened is that he posted a photo of a carving that really “spoke to me.”  I was inspired by a particular trout that reminded me of a “ghostly” image in that the whole trout body is not see

n yet hidden in an artful way behind the wood in the midsection of the trout.  I immediately thought of the Gray Ghost fly of Carrie Stevens’ and how the two would compliment each other in spirit if not in art form.

I sent a message to Jim and introduced myself and after some dialogue back and forth Jim decided to send me two carvings, one being the “one that spoke to me.” and the other another trout for me to use to display at shows and promote our artful endeavors.  I will send him flies and he will do something similar for shows in his area by displaying flies with his carvings should he be inspired.

When I receive the box of carvings in a couple of days I will post pictures.  I’m so excited I can’t wait!

His work is beautiful and reasonably priced.  Jim Wiley’s face book page is at https://www.facebook.com/wileytrout/